A sociopath hates to be confronted about their lies. The lie is their cover. It is the cloak that a sociopath wears as a mask to the outside world. A sociopath hides behind its lies. Lies give them power. It gives the power to manipulate and deceive. Sociopaths take pleasure from manipulating people. 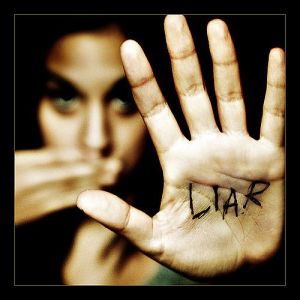 The most important thing to a sociopath is CONTROL. A sociopath hates to lose control.   When you confront a sociopath about a lie, when you have gained the evidence, and confront them, they will do the following.

They will REFUSE to confess to the lie. And will do anything to protect the lie. The lie is their friend. It is behind the lie that they feel safe.

And if you dare accuse the sociopath of something that they DIDN’T do. Because after all of the lies, you quite rightfully do not trust them, who would? They will go on and on and on about how you accused them of something that they didn’t do. They will repeat this for weeks. They use the accusation where you got it wrong, to ‘prove’ how you always get it wrong.  If you accuse them of something that they didn’t do, and they prove this to you, they will use your poor judgement over and over as evidence that they are now telling the truth. ‘but you got that wrong, remember, you always accuse me of things that I do not do?’ Sociopaths are great at deflection.

A sociopath however is different. A sociopath tells lies habitually, pathologically. What this means is that they lie all of the time. Most of what they say is not the truth. The sociopath lies deliberately to manipulate and deceive, and mislead you. When the sociopath is lying they have no care about your welfare, or your needs. They are simply thinking of their own selfish needs, what they can get. Or, to derail you, so that they can maintain their secret private life. The truth leaves a bitter taste in their mouth.

A sociopath will tell lies about everything. From what they ate for breakfast, to how much money they have, to what happened in their past. They will tell the most incredible lies.

There is a saying ‘the bigger the lie, the more believable it is’. The sociopath would think nothing of telling you that somebody was dying of cancer (even themselves) if it suited their own needs. Sociopaths love to play the victim, to gain your empathy and kindness. Playing victim, they have further manipulation and control over you.  They lie when often it would be far easier to tell the truth.   There is no sense to it. They do not  think ‘obviously this lie will be found out’ this doesn’t matter. What is important is using the lie to get what they want and to stay behind the mask of deception. Sociopaths use illusion to create confusion.

Sociopaths like to win. They like to get what they want.  They will lie and betray your  trust, to use you, and to get what they want from you. You might wonder, but why are you lying about this? Sociopath’s create problems that do not need to be there in the relationship. They tell lies, that are obviously going to be found out at some point in the future. This does not bother them, as they get a rush of endorphines to the brain, from lying and conning.

If the sociopath makes the promise to you, that they will stop telling lies, and will be honest, if they confess to lies from the past, and promise not to lie again, they think one thing – if you believe that line. Sucker!! …. it won’t be very long before the sociopath is lying pathologically again. If you visualise how difficult it would be for you to constantly tell a lie, all of the time. This is how it is with sociopaths. Even if they meant it, that they would stop lying, they would tell one lie, get away with it, and be believed, they would get a high from lying to you, and getting away with it. From this, more lies are told, and the lies increase within a short period of time. Until the sociopath is once again living the life of illusion behind the mask. Almost full time.

Also see Catching the Sociopath in the lie

Disclaimer – Photo from unknown source – please make contact if this is your image and would like the photo removed.

36 thoughts on “Catching a sociopath in a lie”