The sociopath is ghost on a hamster wheel of life. They feign that they are not ghosts, and that they are real solid people. You won’t realise that their physical manifestation of love, everything that they are, is made up of the essence of you.

They are ghosts. Empty vessels. While their mind and brain power is sharp, the rest of them, is empty. Like a ghost. They need to find a target who is

We all do trade offs in relationships. The problem is, that the trade off that the sociopath offers, exists only in their mind, it is a product that is as real as the emperors clothes, a figment of their imagination. If you dare to object that the clothes are not real, and therefore this is an unfair deal, you will be met with anger, deflection, false accusation, which will confuse you even further. The sociopath will stand by the lie, as it is always more important than your feelings. The lie is their protection, it is their friend, and sadly, the lie is less transparent than the invisible clothes worn by the emperor. 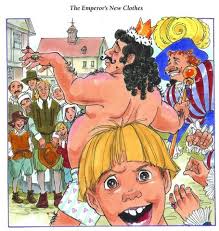 The sociopath will become angry with you, when you decide that you no longer want to be

This leaves you with little to no rights. You are forced, by way of obligation, usually because you have been forced to invest, but only your investment will be real. The sociopaths investment, is merely words, and an illusion.

The sociopath will maintain that they will stick to their part of the deal, but realistically, they can’t as they do not possess the product to keep to their end of the bargain. All that that they can do, is confuse you further, feed you more lies, illusion and confusion, and stall for time.

If they say that they will be everything that you want from them and that they will change, they will tell you this, it is like everything else, a lie. As the sociopath will never possess the products that you so desperately want, they can only sell a product that is made up. That doesn’t exist, that isn’t real.

The children laughed, when they watched the emperor walk past naked, they knew that he was wearing no clothes. Children are smart, and see the truth….. the emperor had pride, didn’t want to admit that he had been duped and conned….. the sociopath manipulates, controls, and keeps their partner, exactly the same way.

28 thoughts on “Like a Hans Christian Anderson fairy story, the sociopath is as empty inside as the threads that are woven to create the Emperors new clothes”