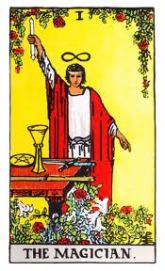 The sociopath is the ultimate magician

I had practiced tarot for a long time, since I was sixteen years old. I had no idea that the person that I was involved with, was either a sociopath, or even that he was a compulsive pathological liar. Shortly before he ran off with money that he had stolen from my bank,  I had felt anxiety, but I wasn’t quite sure about what? I set out a tarot spread, which repeatedly brought up the magician card. It was reversed.

The meaning for this card is

Magician can indicate greed, deceit, manipulation and using one’s skill and ability for negative ends. It can reflect trickery and cunning, untrustworthiness and mental confusion.

The reversed Magician may represent your typical used-car salesman. He uses his charm and his power in a manipulative manner to convince you of his point of view. Always be careful of this type. Make sure you know what you are buying into rather than being swept away by the excitement he generates.

It is funny how often we have all of the warnings in front of us. Yet we still refuse to see what is right before our very eyes.  A year ago today, he had taken my bank card and was helping himself to free cash from my bank.

The evidence, was right there in front of me. I laid out a tarot card spread and again the magician card appeared.  I looked to him and said

“I don’t understand, it is warning me, of a con man”

he glanced at me, and then back down to the cards, shoveled a bit, then smiled before confidently saying

I believed him because I didn’t want it to be true.

The anxiety wouldn’t leave and I was writing my diary about how I FELT. It was important, as if I tried to raise anything with him, he would deny it, and would often be angry. I felt that I was in the wrong for not trusting him. The feeling wouldn’t go away. He didn’t like to be confronted. I was in the shower, when he went to the shops that day, or at least that is what he had said he was doing.  I wrote how it felt wrong, and that I didn’t trust him. The feeling of mistrust, was almost overwhelming. It made me feel anxious, but his reactions would make me doubt my own feelings and so I would write them down instead.

The truth was that there was a reason for me to feel this way, as I later discovered, he wasn’t at the shop,he had taken my bank card, and was withdrawing cash. Planning his escape. He took £350.00 out of my account in two days. He was also using my card in shops.

The evidence,  was right in front of my eyes. I was suspicious.  I sensed it. I felt it. I brought it up with him. However, I didn’t WANT it to be true, I still wanted the illusion. I didn’t realise that he was selling me MYSELF and exactly what I wanted. I was living in the mask of illusion, and I was definitely deluded. He was a craftsman and master at lying, deceiving, gaslighting, and deflecting, I ignored the signs that were staring me right in the face. At this point, I trusted him more than I trusted myself!

This is the point. For many years I worked with vulnerable people. I often worked with women who were fleeing violent and abusive relationships. In early years, I wondered, why did they stay?

People can stay in relationships with sociopaths for many years. Sometimes decades, simply because the sociopath is the master manipulator, the master magician. You are tricked, conned, fooled, lied to. It is not stupidity, it is because

1. They are very good at being a magician and presenting an illusion

2. You WANT this illusion that they have sold to you (because this is what they accurately assessed about YOU in the beginning).

The Magician reversed often suggests that you may be out of touch with reality and struggling to bring yourself back down to earth. There may be confusion, impatience and lack of a clear plan. You need to return to the lesson of the Fool and free yourself from the current situation in order to give yourself some perspective and reassess the situation.

If you are in a relationship like this and you see the signs, you sense deception, and you feel that something is not right. If the evidence is right there in front of you. Write it down. Go back to it. Revisit it. It is likely that your feelings are right!! The sociopath might tell you that you are being paranoid, stupid, use all his trickery and gaslighting to fool you some more.

The sociopath is teaching you, to trust yourself.

The longer that you stay with the sociopath, the greater your losses will be. After this date a year ago, it continued, he was to take money from my bank account again, in two days time.

And two days later he would leave, having stolen hundreds this week. And then, even more stupid, after a few weeks, I let him come back!!! And he did it all again for another two months. Getting me thousands into debt.

You might ask yourself why me? How did I deserve this?

What you do not realise, is that there is nothing in life which is a mistake. Everything happens for a reason. Sometimes you need to meet the master magician, and be part of the greatest illusion, to learn, perhaps for the first time in your life, to – TRUST YOURSELF!!!

And this is the lesson of the relationship with the sociopath. To learn – to trust yourself.

What did you learn?

9 thoughts on “The sociopath is the magician, who will prepare the greatest illusion on earth..”